Menu to pick and choose what icons you want under the dropdown menu under the PGSharp logo. 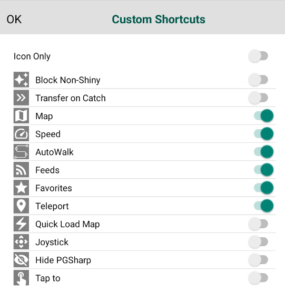 Use the slider or type the number of how fast you want your avatar to walk in km/h.

This is the main feature of Spoofing. It allows you to play anywhere in the world. Turn it off if you want to play at your actual location without being able to walk around.

Turn this on if you want to manually move your avatar around with a joystick. Turn it off if you prefer playing with the option-tap to walk (more info on that below.)

When this is activated it will hide all PGSharp UI (really useful for taking screenshots). Tap/Swipe the screen with 3 fingers to bring everything back.

Hides your trainer name from the main screen and on the “Me” section. Perfect for screenshots.

This will show the IV of your Pokémon while you check them in your inventory.

Shows the IV of the Pokémon you are in the encounter/catch view.

Shows if the Pokémon was caught, escaped, or fled.

This feature will allow you to throw any type of throw you want.

Nice: Always a Nice throw, 20 XP.
Great: Always a Great throw, 100XP.
Excellent: Always an Excellent throw, 1000XP.
(If more than one is activated the better will override)
Curveball: Will always give you a Curveball bonus no matter how you throw the ball, 10XP.
“AR+”: Gives an extra 300xp every catch as if you were playing in AR mode, 300 XP.
100% Hit: Can throw or drop the ball anywhere on the screen, and will always count as a hit. (Note, 100% hit is not 100% catch.)
Auto Feed Pinap: Will automatically feed a Pinap Berry to a wild Pokémon. (as long as you have them.)

A map that allows you to search for places to spoof by using the magnifying glass, you can tap on the map screen to teleport or walk to locations, create custom routes, favourite certain locations, and view Pokéstops and gyms in whatever location you are at. 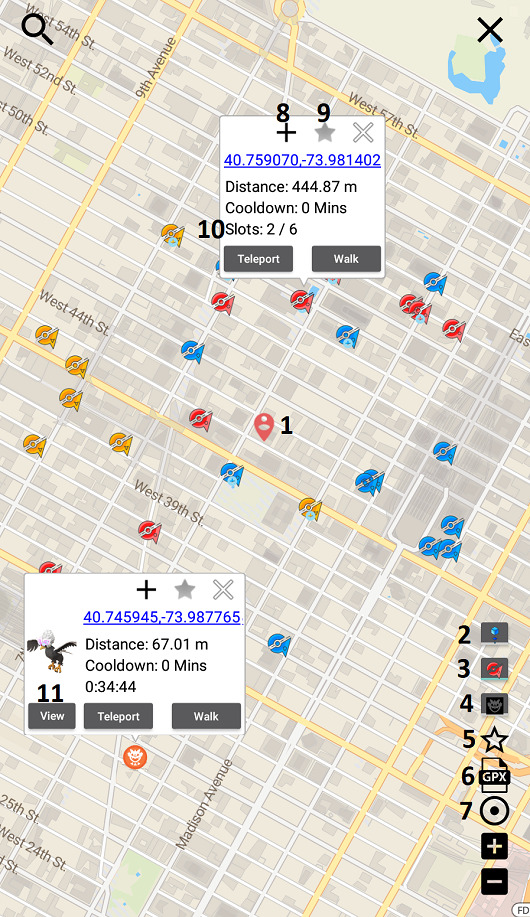 1 – Your location
2/3/4 – Tap to show nearby Pokéstops/ gyms/raids.
5 – Tap to open the favourites section
6 – Tap to import GPX files
7 – Tap to center your location on screen
8 – Tap to add a second point, to make a custom route
9 – Tap to add the location to your favourites
10 – Display empty/occupied slots in the gym
11 – Tap to view the raid directly

This will allow you to walk or teleport to anywhere you tap on the Pokémon Go map.

Allows you to choose what pokemon you want to be shown spawning near you on the map. Tap the Pokémon on the bar to instantly teleport/walk to. Double-tap the Pokémon to encounter directly.

1 – Selects what Pokémon you want to show up on the Nearby Radar. Select “All Possible Shiny” if you want it to scan for any possible shiny Pokémon.
2 – Allows you to choose a specific type of Pokémon you want to search for (useful for catching a specific type quest).
3 – Turns on the Shiny Scanner feature.
4 – Only shows shiny Pokémon that you come across on the Nearby Radar Bar.
5 – Shows the Pokémon on the map as their shiny form.
6 – Allows you to receive phone notifications for when a shiny on the map appears.
7 – If you are walking around and a shiny appears on the map, it will stop you until you resume walking yourself or catch the shiny Pokémon.
8 – Will pause the VGP when a shiny Pokémon appears on the map so you are able to catch it before the VGP attempts to. 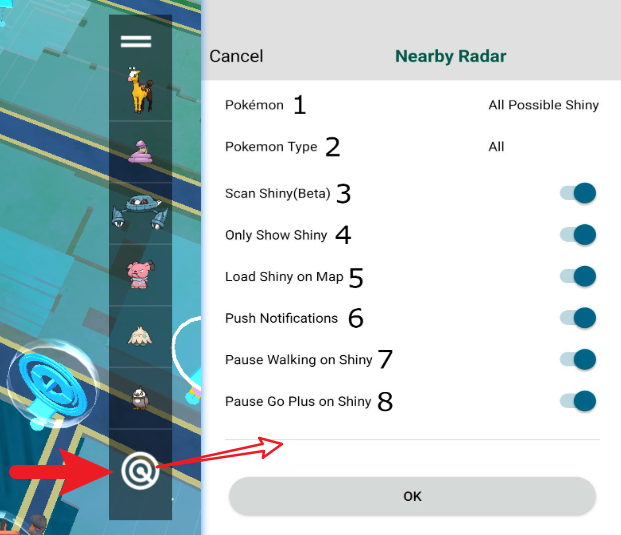 Allows you to display pokemon feed(s) on the screen.

Pokemon Feed: Allows you to see Pokémon with 100IV that are currently spawning in the world. You can create a custom feed such as the Pokémon you’re looking for, the IVs you want, gender, different forms, the level you’re looking for, and the distance you want to travel to find them.
Raid Feed: Allows you to see raids going on live and filter them based on raid popularity (as in lobbies are always pretty full), distance (how far away the raid is), time left (how long the raid has left) and level (what is the star level of the raid). You can also create custom feeds, such as by only looking for a specific level raid, an ex-raid candidate gym, boosted weather, or the colour of the team that controls the gym.
Quest Feed: Allows you to see specific quests from Pokéstops. Lets you customize and create specific feeds for certain quests such as Mega Energy, Stardust, Items (Golden Razz Berry, Rare Candy etc., and Pokémon you can get from quests.

When you teleport, if you have activated a cooldown period, the timer will start
and let you know how much time you have to wait. Tap on it to see your cooldown history. [More Details]
Note: Keep in mind that the cooldown timer cannot track anything you did outside of PGSharp.

Will skip catch and take you back to the map screen. (Also skips ball wiggle and pop-out if Pokémon is not caught.)

Skips most cutscenes such as trading, hatching eggs, and evolving Pokémon.

If a Pokémon is not shiny when you tap on it you will not enter the encounter screen.

Sometimes help load the map faster after teleporting to a new location. (sometimes it still will load slowly especially if you are teleporting quickly.)

Increases the radius of Pokémon spawns around your avatar. 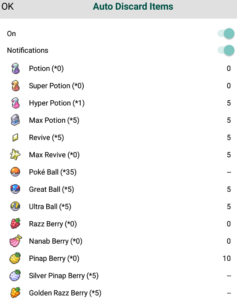 Automatically transfers all Pokémon that do not fall into the options you select
(does not transfer raid Pokémon, Pokémon from quests, eggs or shadow Pokémon from rocket grunts/leaders).

Allows you to defeat all Team Rocket members, bosses (Arlo, Cliff, and Sierra), and Giovanni in seconds, without ever having to fight them. The first Pokémon you choose to battle only loses one HP per battle.

Skips the animation of the opening and the sending of gifts. Opening the gift is done instantly as soon as you click on the gift, and sending it to your friend is done by tapping on the gift icon. Check the Sticker option if you would like stickers to be added to your gifts.

Automatically play, take a snapshot, feed and open any gifts your buddy brings you. You can choose what berries/poffin it will feed your buddy by selecting the option.
Please note that it will choose whatever option comes first in the list (list starts at poffin). If you have a berry/poffin selected that you do not have any of, it will pick the next berry that comes after what you have selected.

Will automatically complete any snapshot quests you receive.
Example: “take snapshots of 5 different water species”, “take a snapshot of a wild Pokémon”, etc.

Renames all non-manually named Pokémon depending on what options you select. (Note: only you can see the name change)

Shows PvP ranking based on Levels and Leagues in the Encounter/Inventory IV.
Click here for more information about PVP rank or Google.

We use cookies to ensure that we give you the best experience on our website. If you continue to use this site we will assume that you are happy with it.OK